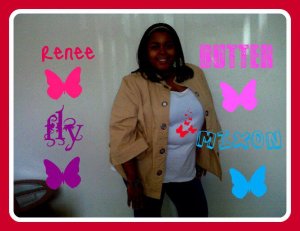 During the month of March our country takes the time to recognize the accomplishments of great women. The contributions of these marvelous women are in the area of education, our justice system and other career professions. We recognize women such as Condoleezza Rice who was the first black woman to serve as the first National Security Advisor and the Secretary of State for our country from 2005 to 2009. We also recognized the accomplishments of Sonia Sotomayor who became the first Latino American Supreme Court Judge after being nominated by former President Barak Obama in May 26, 2009. Finally there is the accomplishment of Misty Copeland who became the first Black American female Principal Dancer with the prestigious American Ballet Theatre. However, the one important woman who I would like celebrate during this woman month is my sister Renee Butterfly Mixon.

Ye have not chosen me, but I have chosen you, and ordained you, that ye should go and bring forth fruit, and that your fruit should remain. – John 15:16

As a dedicated mother my sister through the grace of the Lord raise three children who are beautiful, well educated, and productive citizens in our society today. She was a great mother to her children which she always communicated to them that she loved them, believed in them and that they were precious gifts from the Lord. She also encouraged them to excel in getting their education and was always there to support their dreams rather she had to travel near or far. The life she lived as a single parent mother was one that the Lord is enable her to do but turning her mistakes into a message to all hurting single parent mothers. My sister sought to raise her three children on the promise of God which said in Proverbs 22:6, “Train up a child in the way he should go: and when he is old, he will not depart from it”. Each time I see her three children rather face to face or a picture on social media, the legacy of Renee lives on through each of their beautiful smiles.

An instrument of Healing and Reconciliation

As a woman of God my sister Renee had a sweet spirit, she was a woman who love the Lord. She believed strongly in the power of love, healing and that people should always be giving a second chance. The same grace, mercy and forgiveness that the Lord had given to her, she was willing to share with her family members. Renee Butterfly Mixon was not only my sister, but a mentor and a real anchor of support to those in need. Myles Munroe once said “there are two dates that we cannot control, that is the date of our birth and the date of our transition into Heaven”. However the one thing we can control is what our dash in the middle is lived and how we treat others. One of the things that the dash in Renee life spoke loud was her fighting to keep family together. She had a burning passion to not allow pain and hurt to keep her family members separated from one another.

Now though these hurts and offenses made have been caused either by our parents, aunts or uncles, Renee was determined to not allow their past dramas to keep her family from not speaking to one another. In Proverbs 18:19 says “A brother offended is harder to be won than a strong city: and their contentions are like the bars of a castle”. The dash or the life that she lived was about bring healing and restoration to her family members that she loved. Sometimes are family relationships can be the toughest relationship to deal with verses others in the workplace, church and in the community. However, I believe Renee understood what the word of the Lord teaches us in Proverbs 17:17 that says “A friend loveth at all times, and a brother is born for adversity”. When there are family differences among family some people will choose to walk away, throw up their hands and say I am done with you.  However it did not matter to Renee if your name was Ross, Hampton or Strong she always wanted her family to be united as one and being there for one another.

A Voice and not an Echo

The meaning of Renee name in the French language means to be reborn. Though we all affectionately called her Butterfly, I believe the reason why the Lord allowed us to call her that name was because He transformed her life by the power of His grace. He gave her that name because of the things that she had to endure in life and not allowing it make her bitter but to make her a strong woman of God. It was the Lord that gave her the strength to move forward after going through a divorce in her marriage, overcome domestic violence and abuse. She surrendered herself to the Potter and allowed Him to put her back together the Potter’s wheel. He gave her purpose and a message to speak to women that they were beautiful and could recover from their ashes of pain and rejection. She united herself with other likeminded people and took her message to places like Atlanta, Georgia, Detroit, Michigan and to the steps of Capital Hill in Washington D.C.

Her name Butterfly also symbolized to women who had gone through domestic violence that the Lord could turn their doubts and fears about their life into faith and trust in Him. She lived her life filled with wisdom and passion to let other women know that she understood their pain and was willing to show them how to love again. We will always remember her lovely smile, her beautiful spirit and her voice of encouragement she gave to us all. Renee Butterfly Mixon was a faithful member of the Michigan Coalition to End Domestic Abuse and Sexual Violence. She allowed the Lord to use her to be a strong voice and not an echo on behalf of her family and all women who all need a new, fresh and transformed life.